Also, I found some morels, but I didn't care

The morels I found on this day were pretty much overshadowed by the emerging Polyphemus moth I found.

Still, my first love is mushrooms.
Posted by Mycologista at 11:11 PM 2 comments:

Dryad's Saddle, in a big way 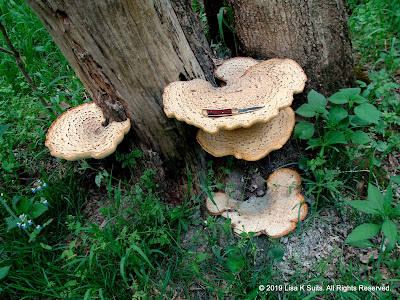 Polyporus squamosus.
My open pocket knife is 5-3/8" long.
The grey cast on the ground is dropped spores.
These are getting a little older; young, fresh specimens are more yellow (and you can see them from really far away).

These are perfectly edible, but it's one of the weirdest things I've ever tasted. They smell just like watermelon rind, or cucumber. Maybe if I didn't expect them to taste like "mushrooms" I would like them better.

I dunno, some people really like them; I'd try them again.
Posted by Mycologista at 6:16 PM No comments: 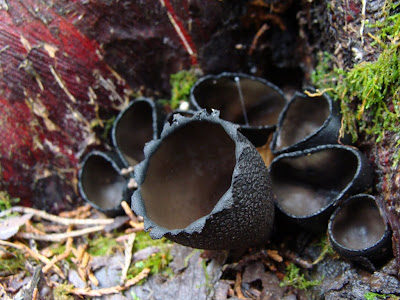 Pseudoplectania or Plectania or what?, originally uploaded by Mycologista.
Everybody assumed these were Devil's Urn (Urnula craterium) except they're not growing in the right place, among some other features that didn't line up. U. craterium grows on smallish sticks. I found lots of these, all jammed up tight against the base of Eastern Red Cedars. They're also much smaller than devil's urns, biggest only about 1/2" across.

To be fair, the big one in the center (above) with the nice fringed edge probably IS a standard devil's urn. But all the little ones behind, not. 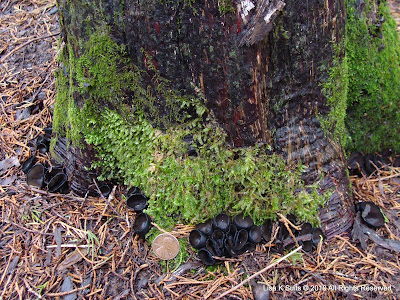 Michael Kuo himself, the rock star of mushroom book authors (his books are hugely useful and highly entertaining), has offered to take a closer look at them. His website, www.mushroomexpert.com, is the go-to site for mycophiles.

I'll eventually get around to sending some dried specimens to him. The poor guy, he's swamped with "What's THIS?" e-mails, including from me. Well, you makes your bed, you sleeps in it.

*Update: I've passed this around and a few actual mushroom people agree that it's probably Plectania. Or Pseudoplectania. Not much info out there on these for us amateurs.

Posted by Mycologista at 6:08 PM No comments: 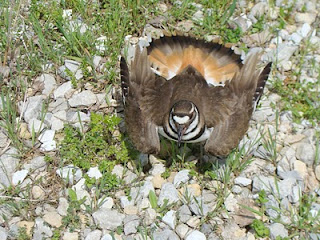 Hey! Look what happens when you get too close to a Killdeer on her nest, before she breaks and runs off with a fake broken wing, trying to lure you away.
I never knew about those beautiful orange under-feathers before.

Posted by Mycologista at 5:02 PM No comments: 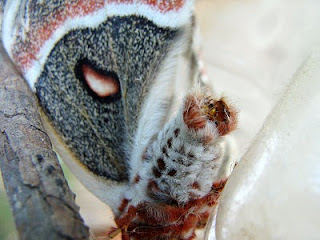 So. This is a MALE (see previous post, "Cecropia moth"), and these are his claspers that he would have used if he ever found a willing female, but he never went to find one. I would find him each morning positioned like this. When I would move the container to get a better look, he would close this up.


The helpful crew at bugguide.net told me the females usually don't fly off, but instead stay put and point their magic pheromone-wand in the air to attract males. Not having ever seen a female Cecropia moth's pheromone organ, I thought that's what was going on here.

We don't know why he never flew off.

Posted by Mycologista at 4:43 PM No comments: