Let us think for a moment about how many rotting carcasses would be around for a lot longer if not for carrion beetles and their fellow “corpse fauna.”

I thought this was going to be kind of a quick post of some photos of cool insects on tree sap, but then I found out a lot more stuff connected to this seemingly simple event.

I’ve seen carrion beetles in the woods lots of times, on poop or dead things, and I’ve discovered they are very wary beetles. When I approach to try to get photos they quickly scurry to hide under something. But I have developed some sneaking ability over the years from trying to take pictures of things in the woods that don’t want you that close. I think when you have a camera covering your face you register more as a collection of weird shapes, not very threatening, rather than your big two-eyed face moving in. Then all you have to do is not make sudden moves while you try to sneak in as close as you can—although what you think is slow might not be slow to our more sensitive animal friends.

Anyway, I came across a phenomenon: dozens of American Carrion Beetles congregating on a tree afflicted with “alcohol flux.”

There’s more than 50 Necrophila americana beetles in that photo (click to view large! Keep zooming!). As soon as I started walking towards them (from more than six feet away!) they started dropping off and diving under leaves. I thought I’d have a little more leeway than that—I was figuring on more like three feet before I had to really start sneaking! I’m going to guess that the ones that remained were too drunk to sense danger.

So. Bacteria and yeasts can get into wounds in trees and start fermenting the sap. Fermentation produces gases which creates pressure which forces the juice out through the wound (called “fluxing”). Depending on which microorganisms and what location inside the tree, this causes a couple different kinds of flux diseases (some are called “bacterial wetwood”). This smelled very strongly of fresh beer, so I’m going with “alcohol flux.” One publication said, “The exudate has a pleasant alcoholic or fermentative odor,” and it really did. They used to try all kinds of things to cure this stuff—flooding it with bleach solutions, drilling holes and inserting drain tubes, etc. Apparently that just prolonged it or made it worse. Now they recommend just leaving it alone, as it isn't really implicated in tree decline.

Wasn’t sure why these meat-eaters would be attracted to alcohol, and while trying to get more info about what carrion beetles do I ended up wandering down the path of forensic entomology, and learned some things I never thought about before. In the first phases of flesh decomposition, when it’s all putrefying and liquifying (and getting stinky), flies are the first visitors. When things die all kinds of exciting chemical reactions start to take place immediately (or stop taking place), and the resulting odor is detected by flies within minutes. They lay eggs, and the larvae eat the flesh.

Were the carrion beetles fooled by the odor and thought there was a flesh-eating party about to start there, or do they simply like fermenting tree juice? They seemed excited. Much congregating!

I've seen the foaming, bubbling version of flux, too, with lots of different species all over it, all quite close to each other—butterflies, ants, bees, wasps, hornets, assorted beetles and flies. They, too, seemed excited (because they were drunk!), lots of darting around and flying about, and ignoring each other and me.

So, I had just assumed that since they’re called “carrion beetles” that they eat carrion, but that’s not quite accurate. Along with learning some of them like rotting fruit, I learned another unexpected thing. What they’re mostly eating on a carcass is the eggs and larvae of the flies that were there first! And they carry phoretic mites around with them, which also eat fly eggs. You can see a few of the mites in the second photo, small tan spots on the beetles (click to view large). Sometimes there’s a whole lot of mites per beetle. And the flies just keep coming and laying more eggs, and the carrion beetles and their mites just keep eating them, and when the carrion beetle eggs finally hatch, the larvae eat some fly eggs and maggots and the flesh that remains because their parents and parent’s friends kept eating the competition. Later the larvae drop off and pupate underground all winter, and there's speculation that maybe some mites go with them? That’s one idea about how the mites end up on the adults—they were with them as pupae.

Different species of carrion beetles like different stuff. Some like snakes, some like feathers, some specialize in reptile eggs (viable or not? I don't know). Some do eat primarily wet flesh, and some like more leathery skin. I have seen them on stinkhorn mushrooms (but they might have been fooled by the smell). Some are attracted to rotting fruit. Still not clear if they're eating it or playing in it.

Then there's the burying beetles…besides what you can see them doing, like dragging a little corpse more than 200 times their weight up to 15’, and excavating the ground underneath it until it’s completely buried, both parents care for the larvae, guarding them and feeding them regurgitated food. Isn’t that nice? That's more than hummingbirds do, and everybody thinks hummingbirds are so cool.

From now on I'll always go investigate trees with weeping wounds to see who's there. I hope to find more carrion beetles and improve my sneaking to get better photos. Carrion beetles! Their larvae eat rotting flesh so you don’t have to!
Posted by Mycologista at 8:24 PM 2 comments:


When Entoloma abortivum attacks Armillaria, "shrimp of the woods" is the result.

I’ve known about these for a while. For whatever reason, they never really grabbed my attention. I’d found a few before, but they were way past their prime, squishy and discolored. This year, though, I found some real beauties, so I wandered a little further down the path of aborted Entoloma. These things are cool!


That’s a pretty big clump. Usually they’re smaller individual units, not much bigger than styrofoam packing peanuts, which is what they look like at first glance when you find a whole bunch of them all over the place.
Click on any image to view large.

For a long time it was thought these were simply malformed Entoloma abortivum (but didn't anybody wonder why?). Then, in the 1970s, some guy noticed that there were Armillaria mellea cells in them (maybe spurred to study this by the fact that they kept finding both species and the malformed ones growing near each other, like, all the time), so everybody assumed the Entolomas were being parasitized by Armillaria, probably because Armillaria has a reputation for relentlessly ravaging trees. Then more people did more studies in 2001 and concluded the exact opposite—that Armillaria was being parasitized by E. abortivum. Any of these theories are fine with me.
If you go with the latest one, you might call them “abortive Entoloma.”

Inside is the same color as outside, marbled with faint pink. Why I didn't cut one in half and take a picture of it, I'll never know.

Aborted Entoloma has some great common names—“shrimp of the woods” is the one I see most often, but there is also “hunter’s heart” (I don’t get that one), “pig snoot” and “ground prune.”

So I found some nice ones this fall, and had the presence of mind to actually look around to see if I could find some honey mushrooms (Armillaria) or Entoloma nearby, and I did.


Entoloma abortivum isn’t all that thrilling, but it’s a perfectly nice mushroom, a tasteful warm grey, with slightly decurrent gills. It does have surprise pinkish spores. 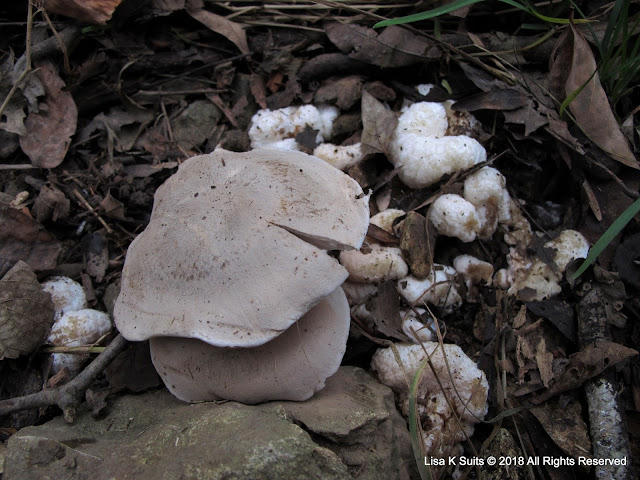 I always like finding a ready-made spore print! I say thank you. It's a lot more convenient than bringing the mushroom home, getting it set up for a spore print and hoping the cat doesn't knock it off the counter.

The Entolomas I found were in the company of A. gallica. 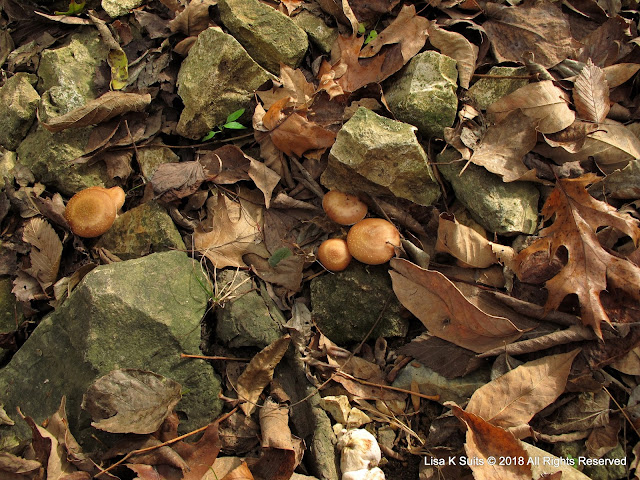 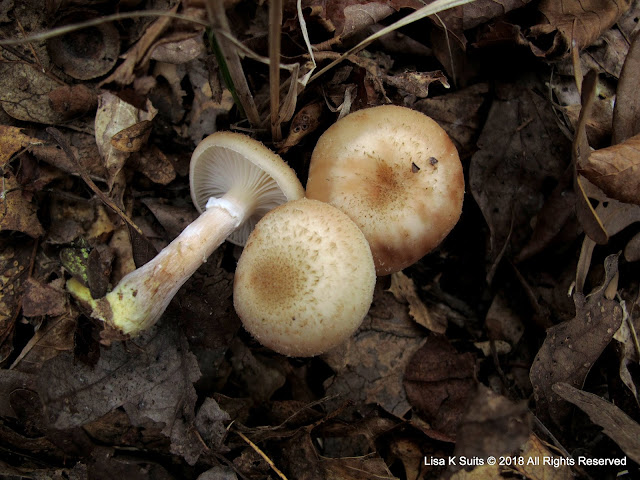 A. gallica doesn’t grow in big tight clumps like A. tabescens, the honey mushrooms you often see in huge numbers in midsummer. They grow singly or in loose clusters near a tree, but not always at the base. Their partial veil is delicate and soft, sometimes nothing but a ring zone on the stem. They’re also generally smaller than A. tabescens.

While we’re on the subject, both the Armillaria and this particular Entoloma species are edible, but I have not eaten the Entoloma because it scares me. There’s some nasty poisonous Entolomas out there.

Hopefully I’ve lost some of my audience now by boring them with facts so they won’t be reading the next part (read: “starting to hunt for aborted Entolomas now and finding my spots”), which is that these things are delicious! Might be my new favorite! I poked around looking up suggestions on how to prepare them, and ForagerChef said they’re best when caramelized, so I did that. I just kept eating them as they came out of the pan. They’re nutty and sweet, with a kind of bouncy texture, a little grainy--like shrimp. Another mushroom that isn’t really anything like what you think of when you think of eating mushrooms. 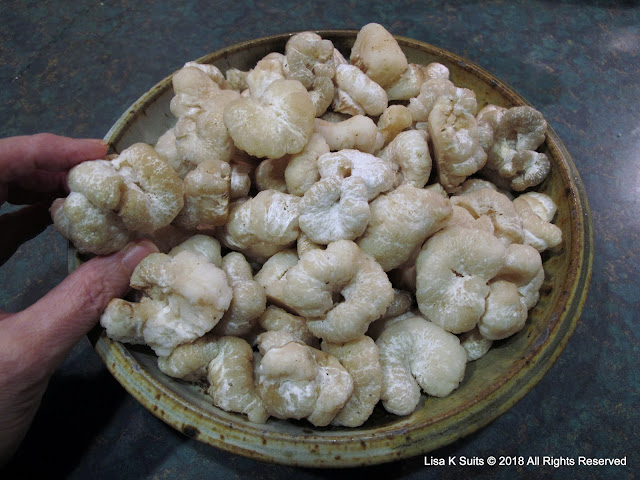 That’s a big beautiful bowl of raw freshly rinsed ones.
Posted by Mycologista at 12:30 AM 2 comments:

Guess whose blog is going to be included in the United States Library of Congress web archives?

I had to do a little investigating to make sure it was real--thought it might have been a phishing scam. When it turned out to be true, I melted the phone line calling friends and family.

"The United States Library of Congress has selected your website for inclusion in the Library’s historic collection of Science Blogs. We consider your website to be an important part of this collection and the historical record."

To be included with the likes of Kathie Hodge's Cornell University Mushroom Blog (she got notified the same day) makes me proud indeed. I'm sure they found hers first, as they should have, and then checked some of the links on her blog roll. 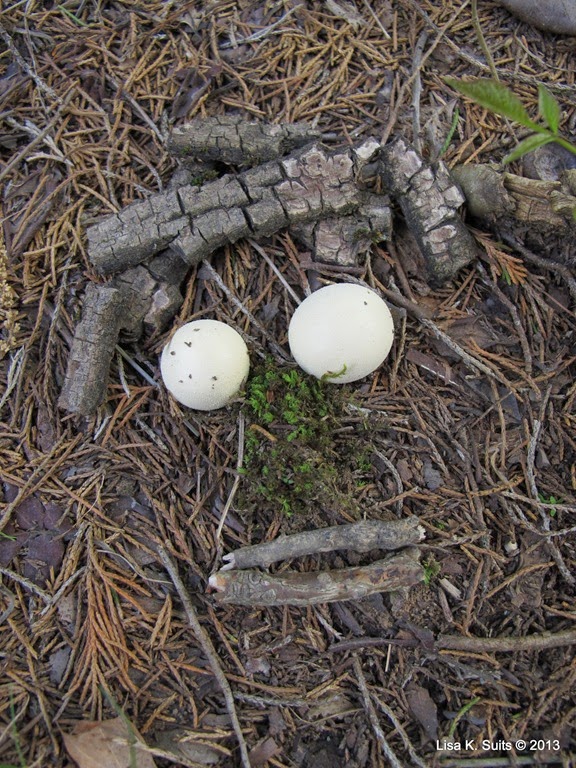