I don’t know about you, but when I think of mushrooms, I don’t think about what sound they make. So I was thrilled when I captured a delightful video of Urnula craterium hissing quite audibly as they sent out a cloud of spores, after I blew on them. I’ll prepare you as best I can for what you are about to see. 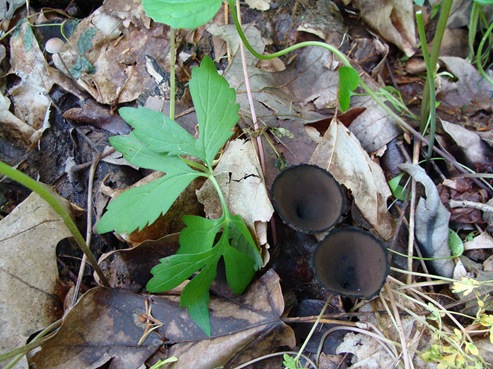 I found out they do this because I wanted to take a picture of one and there were little pieces of leaves and things inside the cup (and springtails, seems like there’s always springtails in them), so I was trying to blow the stuff out of it to clean it up a little. There was about a one-second delay, and then it poofed out a cloud of spores. I’d read about this, but didn’t think it was going to be so obvious! This tickled me, and I wanted to capture it on video, so I started trying to make them poof out spores. It wasn't until I got home and watched the video that I could hear it. Maybe, when I was in the woods, I thought I was imagining it.

“Devil’s Urn” is one of their common names. It’s a cup fungus. Here’s more (a rotten image, I know—oddly, I do not have dozens of images of these to choose from, like I do every other thing I take a picture of--). When this cup fungus is young and fresh (above), it’s smooth and velvety, a little floppy, and a nice open shape, almost a cocktail glass. These (below) are starting to show their age and curl inward a little. Right about now is when their spores will poof out if you blow on them. And you can hear it.

So, they come out in spring, they’re pretty common, and are considered harbingers of morels, as in, when these are out, morels should be, too.


As they age, they start to toughen up and turn brown and get a cool scaly texture on the outside, and the top starts to close up and magically gets a nifty zig-zag edge (faeries with pinking shears). 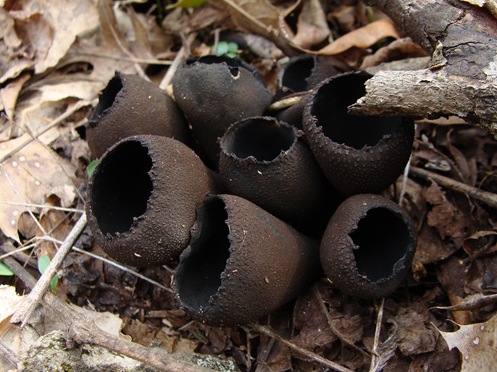 They don’t poof out many spores when they’re this old. I know, because after I made the first ones do it, I hyperventilated my way all over the forest for days, trying to make other ones do it. 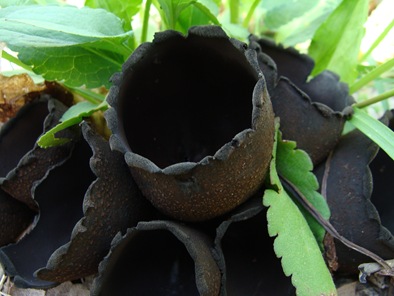 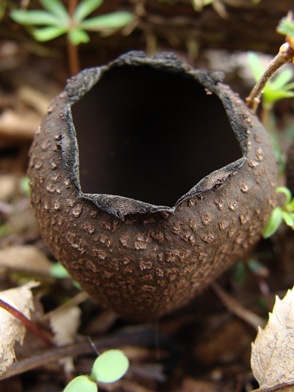 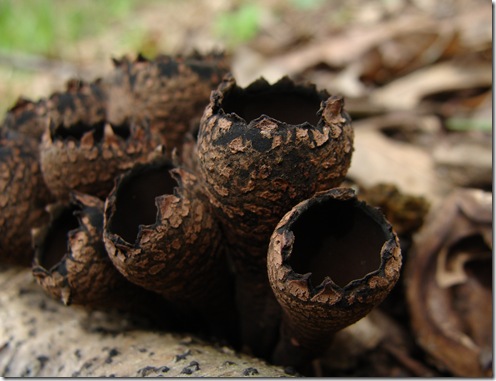 But, we need to talk about this audible spore shooting.

Here’s the video, it’s only 5 seconds long; the first sound is me blowing a blast of air on it, and the next sound is the cloud of spores being released.

I posted this video on Facebook (man, there’s a lot of mushroom people out there), which generated more comments (64!) than any other thing I ever posted, and people with a lot more mycological education than I chimed in with some really great input. My favorite, from Kathie Hodge of Cornell University (there’s a link to her blog on the left), was a link to the Biodiversity Heritage Library, which is digitizing hundreds of thousands of works of “legacy literature” (old research books) from natural history and botanical libraries all over the world, and you can just read them, right there online! And she steered me to a book, Researches on Fungi,  by A. H. Reginald Buller, written in 1934, with one chapter titled “Puffing in the Discomycetes” (which are now called “Ascomycetes”—see here), and another titled “The Sound Made by Fungus Guns”!!!   First he thinks he heard it, while puttering around in his lab while there was a specimen on the table, then he applies himself like a rat terrier to seeing if he can hear it again: lying next to them in the woods, holding fungi to his ear and finding “…when it puffs one can not only hear the sound of the puffing but also feel the spray from the asci as though the ears were being sprayed with a fine atomiser.” A man after my own heart! It’s really charming reading. But, I think I would draw the line at letting a mushroom spray spores into my ear. I think.

He wrote really great explanations of the mechanics of all this, which I didn’t have the patience to read. Maybe if I had the actual printed matter in my hands I’d read it. I’m just happy to know that some mushrooms make hissing sounds when you blow on them.

To help you calm down after all that excitement, here’s a few more images of Urnula craterium. 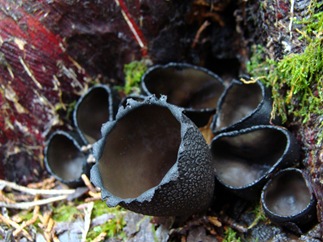 (Some of us think the smaller ones in the photo above are a different species, and I finally got a real live mycologist to confirm it--probably Pseudoplectania.) 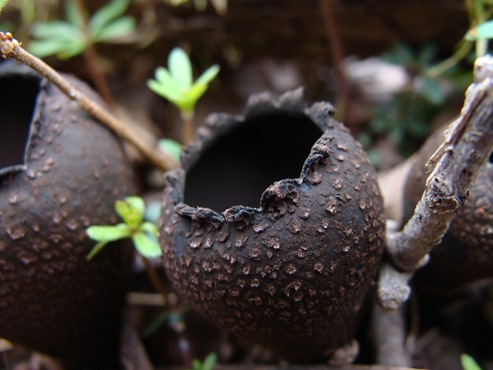 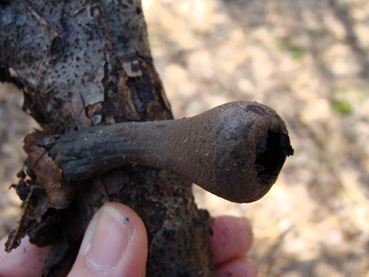 With a human thumb for scale. I've never seen any mention of these taking on the same color as the surface of the wood they're growing on, but it seems to happen fairly consistently.

Anyway, I’m just trying to tell you that some mushrooms make noise. Not all mushrooms release their spores in such an extravagant fashion, but these do. I feel lucky to have witnessed it. Now you can, too!
Posted by Mycologista at 5:00 AM 11 comments: