Arachnophobes, be warned! There’s a big spider down there! 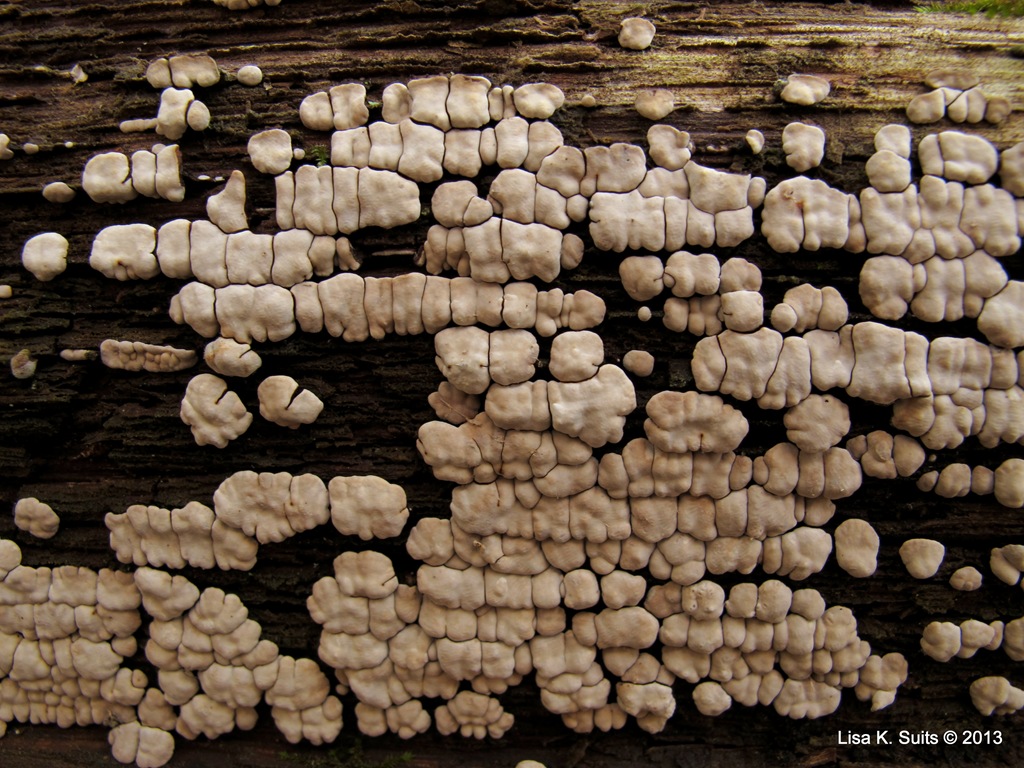 Xylobolus frustulatus, now that's a name I can really get behind.

This stuff is quite common, but I always sidle on over to it and take a few pics, because I like it. Its common name is “ceramic parchment” (because it’s really hard), it’s a “crust fungus” (because of its form), and I just learned the little separate segments of it are called “frustules.” I know that’s a lot of quotation marks in one sentence, but what can you do.

It is almost always found on well-decayed oak.


For one thing, if you were to slice this in half, you would see the stem is not 100% hollow, like it is in true morels. It would have chambers and pockets.

I didn’t slice this one in half because there was only the one, and when there’s only one I feel a pang pulling it up just so I can get a better look at it. It was just sitting there, trying to live its little life, and then I come along and rip it out of the ground? Where does it end? I’ll tell you where it ends: it ends when I find a choice edible. Call me a hypocrite. Not much is black and white.

This is not the false morel with exciting toxicity. That one is G. esculenta, and doesn't seem to be found in Missouri. We can't find any evidence that  G. caroliniana is toxic (although some people are good and allergic or sensitive to it). Look up monomethylhydrazine. The toxin found in G. esculenta can be neutralized by cooking it hard (parboiling it and changing the water several times), but the fumes also contain the toxins, so don’t breathe! And even when it’s been rendered “edible” by boiling it to death, there's a theory that whatever toxin traces are left can build up in your liver, and one day there might be your limit, bye-bye!

At least, that’s as much as I could glean about it. There’s lots of stories of long-term mushroom people who say they've been eating these for years, but I am too scared, no matter how much Europe likes to eat false morels.

When I first went crazy for mushrooms, I made some big honkin’ ID mistakes, talking myself into it, saying things like, “Oh, well, maybe this is just a little natural variation in the growth pattern (or color, ecology, season, texture, size…).” The books will tell you the identifying features, and if what you’re looking at doesn’t have them, just keep walking. The more I learn, the less likely I am to think I got it right—take heed.

I kept coming across these little bundles of pink things, and I couldn't figure out what they were. How do you look that up? Look in a wildflower book index, under “small pink things”? But then, I solved it! Because I found them associated with the rest of itself! 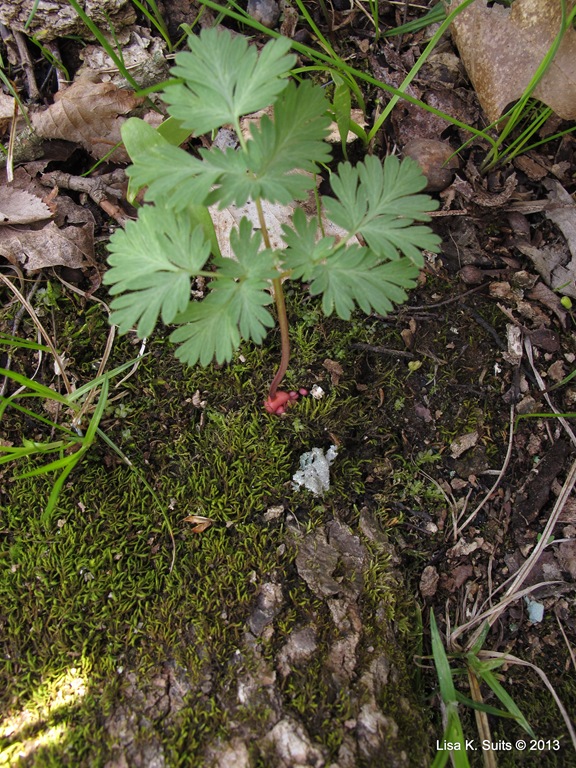 They are corms of Dutchman’s breeches.

Dicentra cucullaria is an ephemeral wildflower. After it makes seeds, the whole above-ground plant disappears until next year. Spring ephemerals get everything done before the trees leaf out and block the sun. I was just never there at the right time before.


If you've looked around at all on this blog you might be getting tired of Urnula craterium, but I still like them very much.

I see many of them every spring, on my eager morel forays where I never find enough to scream about, and this spring I suddenly wondered why I only see them as nice open cups. What do they look like before that?

Well, I seem to have an “ask and ye shall receive” charm, at least when I’m traipsing around in the woods, and I found out!


That funny little depression on the top raised my suspicions. Also, it was kind of flexible, not hard and dry like any good dead man’s fingers.

All that whitish stuff is rubbery jelly. 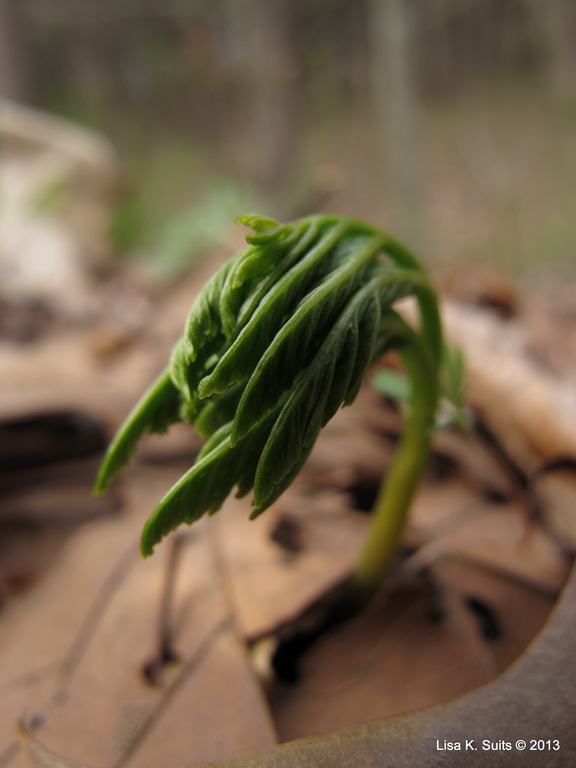 Above, a lovely fern frond, working on waking up.

I figured out what it is, but I’ll have to dig it up and edit later.

Here comes the spider, and then the exciting sycamore seed ball thing! And a simple yet elegant uncommon mushroom, growing a few doors down on the lawn.

I found this nursery-web spider when I was kneeling down trying to get pics of beautiful young Mayapple leaves, and when I was down there, there it was! Perfectly presented! Almost! Had to move carefully so as not to scare it away. I saw it, and actually said, “Whoa!”

Big as my head! Mayapple leaves at this stage are about 3” long, you do the math!

I took a stab at some online keys trying to figure out who this was (Need. More. Field Guides.), but then I remembered my pal is married to a fun entomologist. It’s not what you know, it’s who you know.

These spiders aren't big on webs, as they hunt by waiting to ambush, or actively prowling. But mom carries the egg sac around, and when it’s ready to hatch she makes a protective web nursery, and then hangs around guarding the babies, hence the common name.

I looked at about a million pictures of these, sometimes they have a dark band along their length, couldn't tell if it was an age thing or a sex thing or what.

Okay. Here comes something I thought was so cool I felt like I had won the lottery.

I was happily poking around in the woods, seeing many happy spring events in progress, and I found a sycamore seed ball, just like every other one you've probably seen countless times in your life, and I picked it up for no other reason than just to have something to play with in my hands while I kept walking.

I took a little glance at it, and turned it over, and saw this:

What??? Did other tiny seeds fall into the fuzzy sycamore ball and opportunistically sprout, or what? What was going on there? 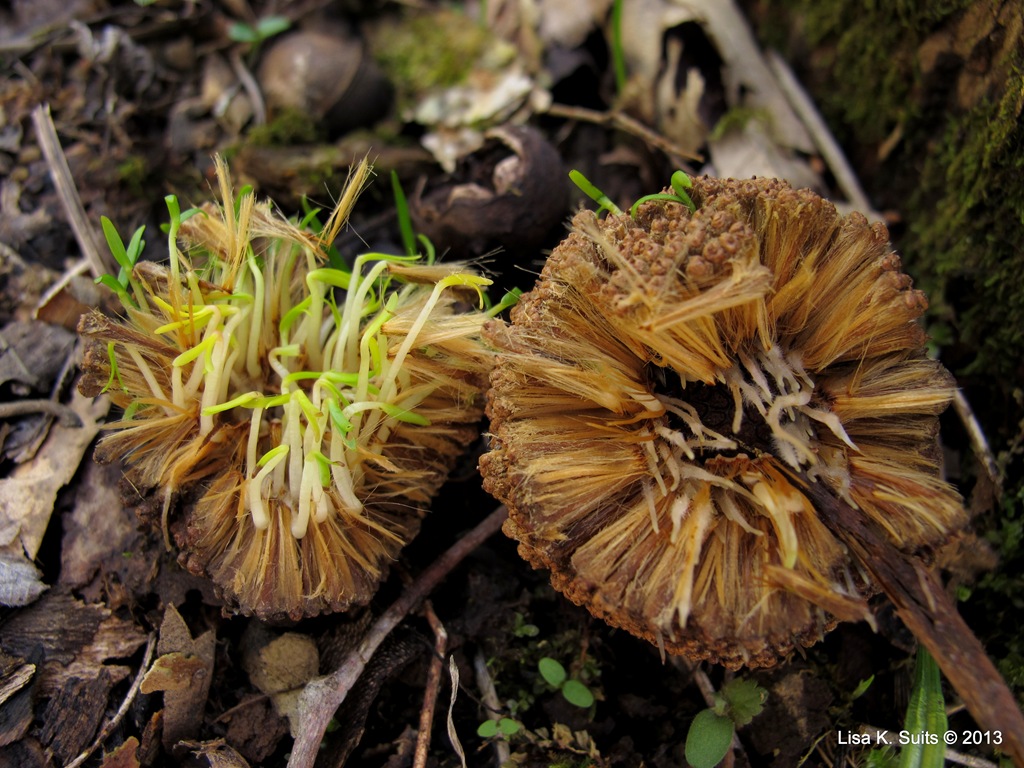 I broke it open, I just had to! 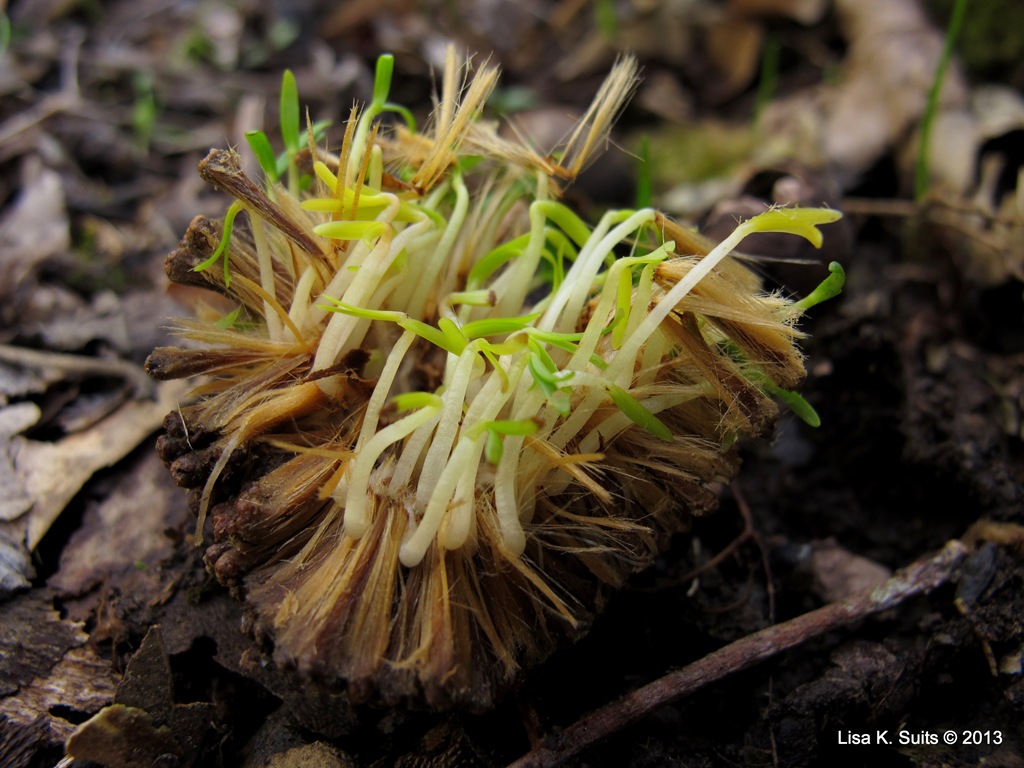 It’s the sycamore seeds themselves, sprouting right there in a big mass! A phenomenon!

I have never seen this, never heard of it, never nothing. Pretty sure this is not how it’s supposed to work. Each seed is attached to a dry fuzzy, and they’re arranged all around a central core, and I’m sure they’re meant to be blown around individually. My best guess is the whole seed ball fell off the tree, and right away got soaked with heavy rain, so the individual seeds never had a chance to dry up and blow away. I found a whole bunch more of these over the next several hikes.


I wonder if I’ll ever see that ever again.

One day this April there was a knock on my door and my neighbor’s lovely daughter told me there were mushrooms on their front lawn, she though I might like to know.


Panaeolus papilionaceus.
Took me quite a few sessions to finally land on an ID. Little Brown Mushrooms can be difficult to nail down, because there are so many of them. I gave up for a while, then found it by accident while flipping through some mushroom books. One reason I was able to figure it out was because these grow on dung, and I happened to know that last year someone thoughtfully dumped a bunch of cow manure on her lawn.

Also, I asked a famous mushroom person if he thought that's what this was, and he said, and I quote: "I believe so."

Now when I see a brownish mushroom with mottled gills like this, I think "Panaeolus" sooner than I used to. It's a start, anyway.

It was also thoughtful of the mushrooms to make a spore print for me (often the last chance for a positive ID, without a microscope), which is that blackness in the image on the left, above. Another mushroom was growing right above the one in my hand, and dropped its spores on the cap below. Thanks! 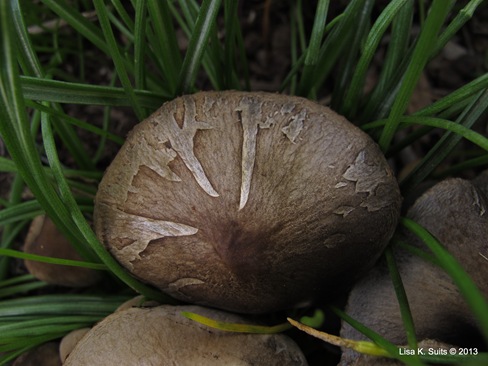 So handsome with age!

Stay tuned for a little more April, combined with some May.