Warning: a spider and swarms of fat red bugs below!

More blah blah catching up blah blah, while emotionally gearing up for the stinkhorn post! Just you wait!

Saw this handsome yellow-capped Amanita right next to the trail, a spot of lemon through some leaves. The first image is after I’d had my way with it (gently)--taken many shots, cleared away some leaves to see the base (but not enough to nail down the ID, apparently), and moved some branches so they were held out of the way around that little tree. The next person on the trail would have seen it presented like this. 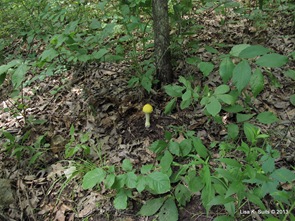 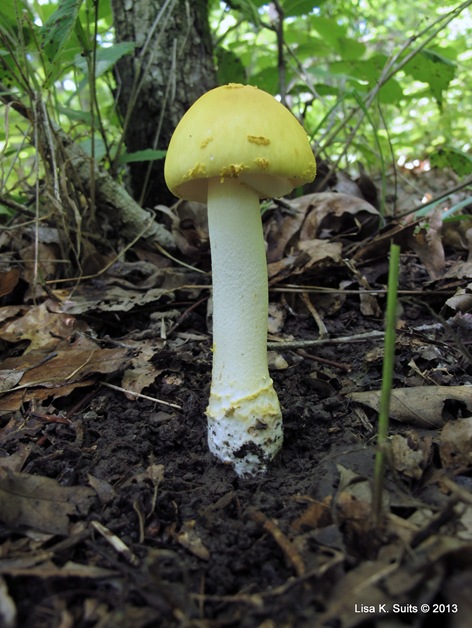 I don’t know what species it is. There are several yellow Amanitas, and this one didn't have all the identifying features of any of them. Well, maybe it did, but it was so pretty I didn't check things that would have helped me ID it because it would have damaged it. Like roughing it up to see if it changed color, or digging it up to get a better look at the base. Or cutting it in half. I just couldn't.

I swear I’ll start paying more attention, if I really want to know what’s going on out there. I keep overlooking important identity details because I'm too caught up in the visuals. I know that sounds corny but it's true.

I came upon a spot with many of these butterflies hanging around. The description says the wings have a bright yellow border, but this was absolutely gold. Shiny, metallic, 24-karat gold. I read the males sit around in sunny spots waiting for females. That seemed to be what was going on here, in a little clearing in the forest. They also overwinter in Missouri. Not the kind of thing I'd think a butterfly would do, but they do. They're much tougher than I realized.

It took major sneaking to get this close.

Here comes the other kinds of bugs, the kind some people might not like. Take your leave now if you need to.

I found a wolf spider carrying her babies on her back, like they do. First time I saw this in real life! 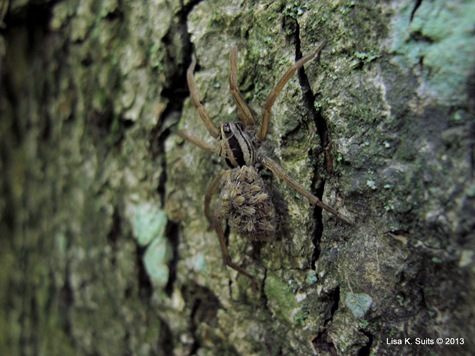 She wouldn't slow down, so this is the best shot I have.

Next is a non-forest phenomenon I saw in a college courtyard planted with goldenrain trees. 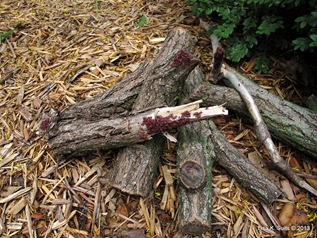 Swarms of red-shouldered bug nymphs. They love goldenrain trees. I think they were congregating like this because they had been displaced by recent heavy rains, and hadn't found their way back to the tree or fallen seedpods yet.

I know what they are because I found them before and figured it out. 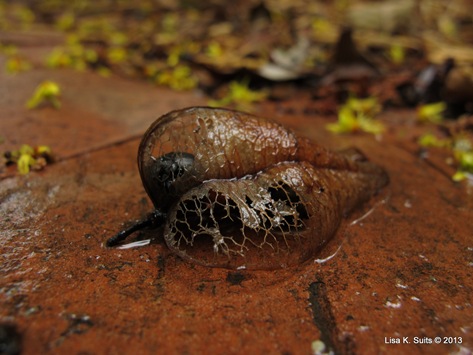 Skeletonized goldenrain tree seedpod in rain. See golden flowers strewn about. There were red-shouldered bugs on the seedpods themselves but they scattered when I got this close. 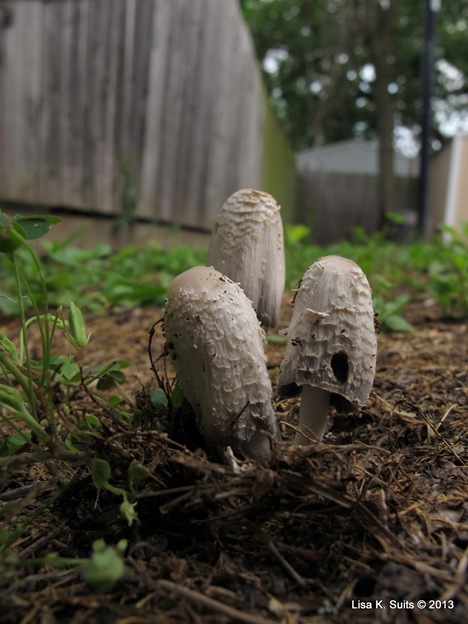 I was going to visit them again in the morning, but it rained hard overnight, and there was not a single trace of them the next day. Not even the disturbed soil!

The Audubon guide says “Fragile as this mushroom is, it has the remarkable ability to push up through asphalt.”

Posted by Mycologista at 4:21 PM 2 comments:

Getting to the good stuff now!

I was hunkered down in some cedars taking pictures of these and a man on the trail asked me what I was doing. 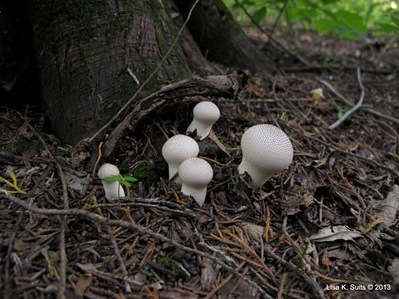 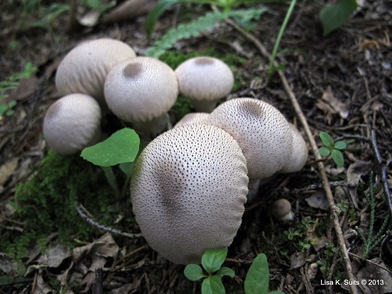 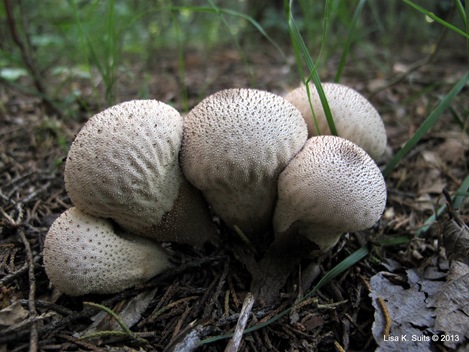 But these Lycoperdon perlatum are not hideous. They are wonderful.
For the record, these "gem-studded puffballs" grow from the ground, in case you're confusing them with the similar Lycoperdon pyriforme, which always grow from wood.

Below, the biggest wood ear I've ever found! 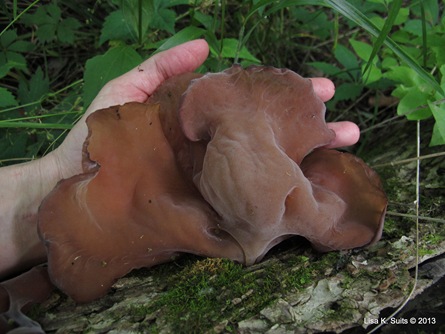 And here are some of the most beautiful wood ears I've ever seen. 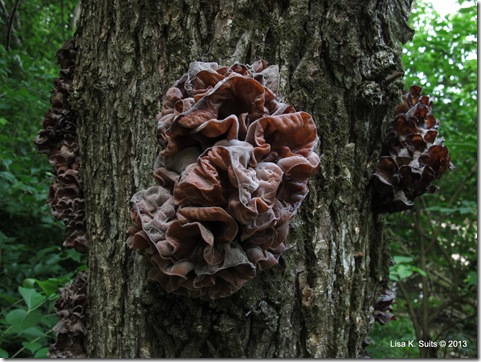 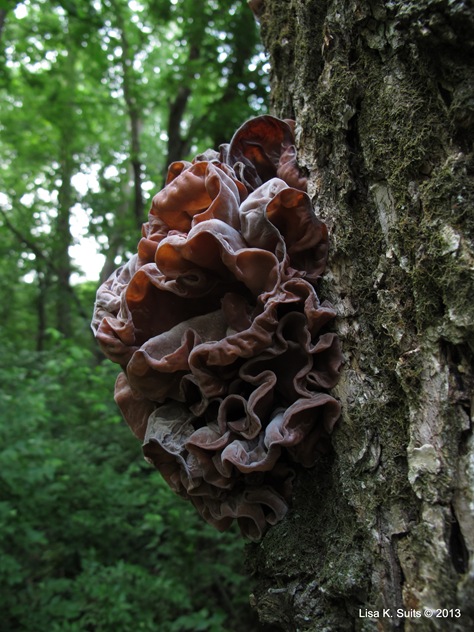 Now you know why I prefer overcast days for photos.

Below, some of that crazy ozonium of Coprinellus domesticus (C. radians is similar, but apparently does not come with ozonium). The orange fuzz is the mycelium erupting out onto the surface, instead of staying below things like it usually does (underground, under bark, etc.). I can’t find much info about it at all. What the heck does “form genus of imperfect fungi” mean? One site refers to it as “air mycelium.” The domain name www.ozonium.com is available. There is a player on Lolking named Ozonium. That is all I could find online.

The Latin name of this mushroom sticks in my mind because on mushroomexpert.com the ozonium is described as “orange shag carpeting”, which is in houses, which is domestic. 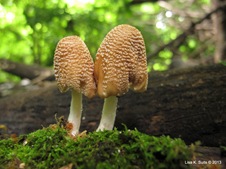 Next is a gorgeous Laetiporus cincinnatus I found, visible from the trail (doesn’t anybody hike on these trails?). 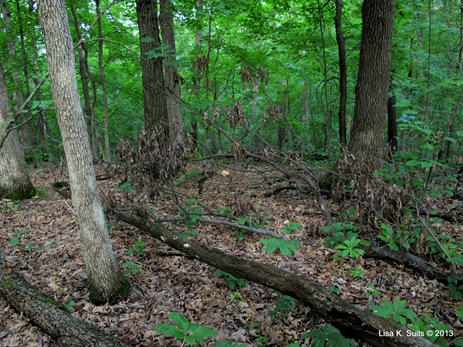 There it is, and suddenly there’s my foot and you can see how big it is. 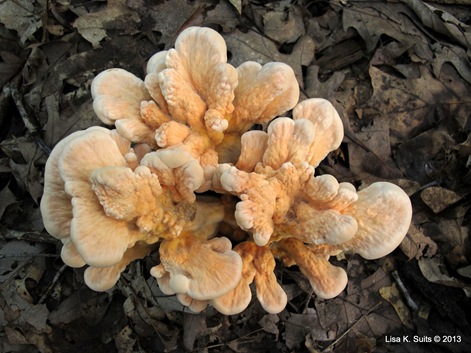 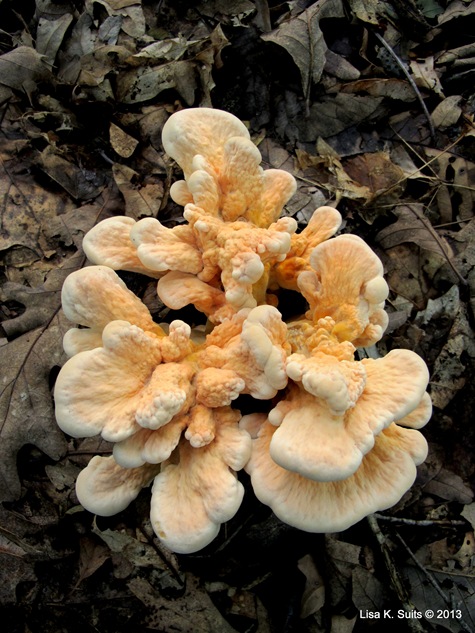 The conversation went like this: “Oh! How beautiful! Thank you so much! What’s the occasion?” And the forest replied, “Oh, no occasion at all, we just thought you’d like this.”

Posted by Mycologista at 9:27 PM 2 comments: