More forest offerings, spring 2011 (almost everything up to late April)

After these there’s still a few more installments coming, of things that deserve their own posts, before I’m current. In the meantime here’s even more of the late leftovers. I can’t help it if there’s so much going on out there! 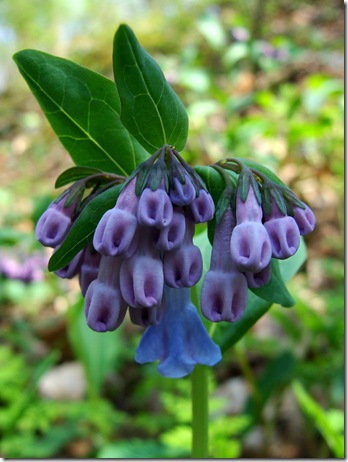 I tell you, I can’t stand it. The buds are this other-worldly opal/purple color, in that great unexpected shape, and then the flowers open very nonchalantly in a completely different color. But it’s the bud shapes that really get me.

Here’s some Goldenseal (Hydrastis canadensis). First time I’ve seen it. Then, of course, I started to see it everywhere. 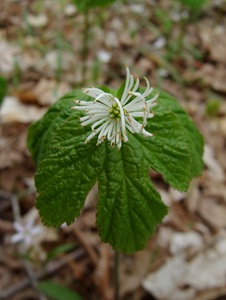 Oh, and check this out: 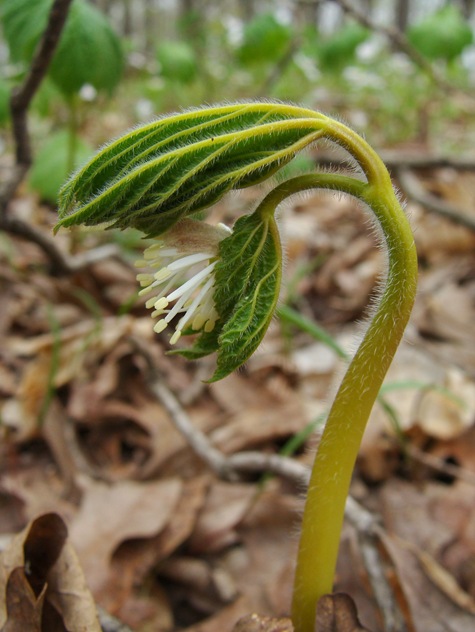 Blooming even before the leaves are unfurled! 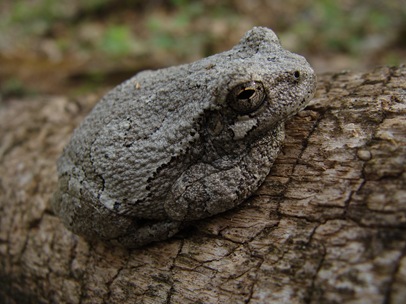 Or it could be Cope’s Gray tree frog, H. chrysoscelis, but you can’t tell them apart in the field (well, their calls are a little different), but H. versicolor has an extra set of chromosomes! So they sometimes call it Tetraploid Tree frog! But never mind that, they can camouflage themselves, like chameleons (but slower)! I’d like to see that, but I think I was pretty lucky to get this close at all.

From a little distance I thought it was a lump of woody polypore or something, on a dead tree. I walked up to see it and it was a frog instead. I actually got this close (this isn’t a zoom shot), through sneaking.
He finally broke, and jumped away, which is when I discovered the yellow on his hind legs: 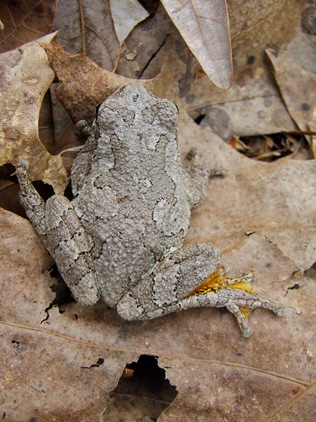 Yet another thing I had no idea about.

Here’s a tiny little snake I also sneaked up on: 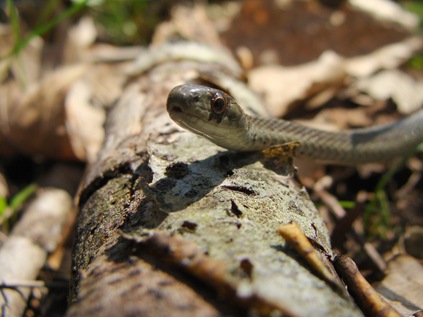 No, I mean tiny, he was barely as thick as a pencil--

He saw me first, and started to go away (made noise in leaves, gave himself away) but then slowed and stopped, so I began my sneaking. I don’t know why he let me get this close.
Its common name is "brown snake." Just "brown snake." Or "Midland brown snake," or "Dekay's brown snake." They don't get much longer than 12", and they eat mostly worms, and slugs, snails and soft-bodied insects. I know from his round pupils that he is not venomous (at least, that rule works in Missouri, barring someone's venomous pet snake having escaped). Here I confess that I did not know until recently that there are several tiny Missouri snakes, just because they're small doesn't mean they're babies.

One last thing. I keep finding may apples that have grown through a hole in a dead leaf as they emerge in spring, and they get pretty tall with this leaf stuck around them: 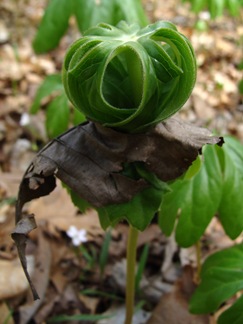 And yes, of course I free them by taking the leaf off, but not before I take a look at this: 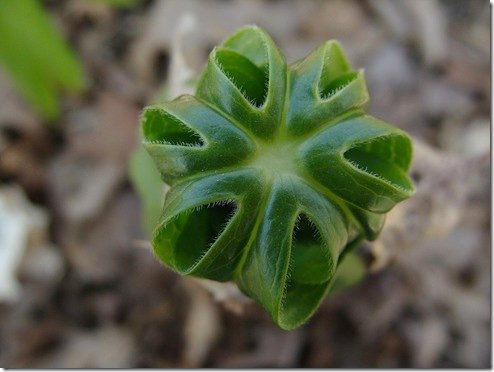 Cameras with macro-settings are the best thing in the whole world.
Posted by Mycologista at 5:13 PM 3 comments:

Once again, I am struck by how much I missed in all my earlier days in the forest, before I got completely consumed with macro photography and started to see things differently. "Oh, look, there's a mayapple," I'd say, having what turned out to be a sort of vague vision of them. I had seen the emerging young leaves before, when they were still twisted around the stem like a little rod ("candling"), but I had never noticed that sometimes there is one leaf, and sometimes there are two.

But the double-leaved ones are pretty awesome:


Here's a thing I read somewhere: "On plants with a single leaf, the petiole joins the leaf blade in the middle, creating an umbrella-like appearance; on plants with a pair of leaves, the petioles join the leaf blades toward the inner margin of each leaf blah blah blah blah blah." Well, that just says that sometimes there is one leaf and sometimes there are two, sorry. There was more info from the U. of Arkansas Agriculture Extension Service: "During the first several years, the mayapple leaf is round and unbranched, too juvenile to flower. When adulthood is reached, the stem...terminates in a "Y"-shaped fork with two leaves." So it has to do with how old the plant is. Now I know.

There's some other cool stuff about their lives on that site--mayapples don't just germinate, show up in spring and *poof* there's a flower and then fruit...it's a bit more complicated. I'll just say that they can count to four.

Here's more of the backlog of emerging spring flowers.

Thalictrum thalictroides. Last year I saw a lot of Rue anemone leaves, but missed the flowers. Well, now I love the flowers. They're about 1/2" across, and they range in color from white to a luminous pink. They're also called Anemone thalictroides, if anyone asks.
False Rue anemone, which looks very similar, only comes in white, has a more deeply lobed leaf, and has tiny little tooth-like white things on the tips of the leaf lobes  ("mucro").

These may not look like much at first glance, but  they're pretty good viewed large (click on them). 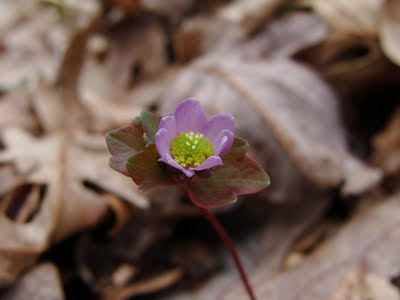 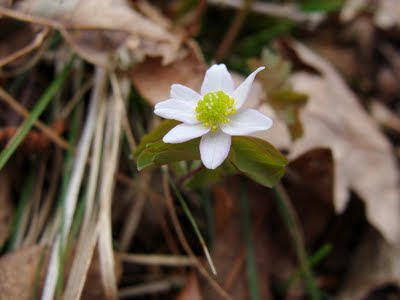 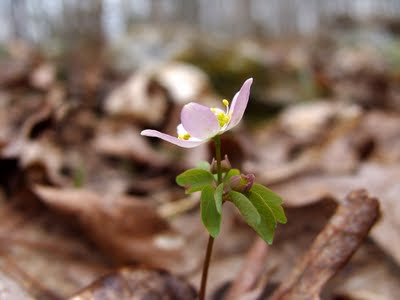 Dutchman's breeches (Dicentra cucullaria) get me because their shape is so crazily atypical of what I think when I hear the word "flower". Who would think of such a thing! I would expect these kinds of antics from a tropical orchid, but not a spring woodland flower in the middle of Missouri. Give a kid a crayon and tell them to draw a flower and most of them wouldn't come up with something like this. 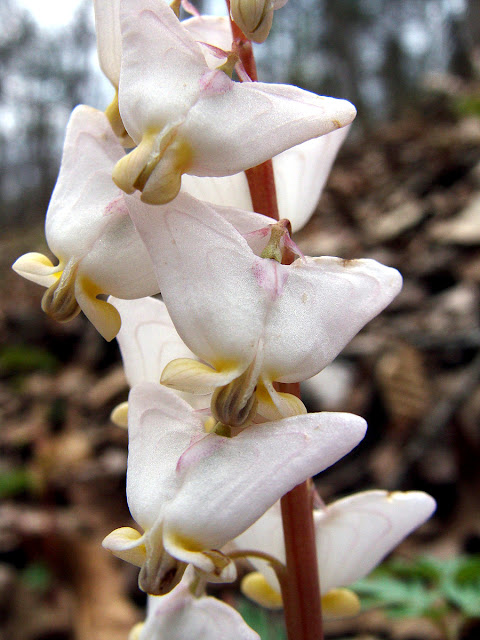 The top flower (above) isn't open all the way yet-- 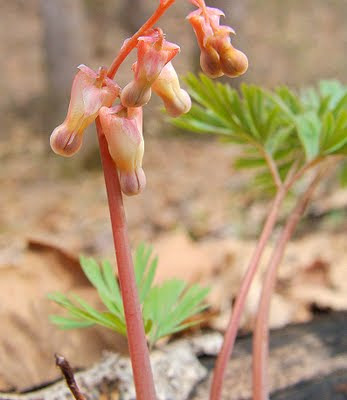 Very young flower stalks are all flushed pink like this 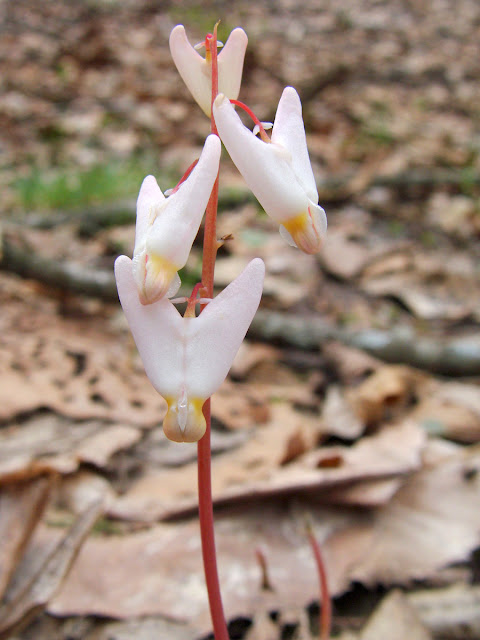 I must have taken a million pics of these. And next year I'll probably take a million more.

The leaves are pretty nice too 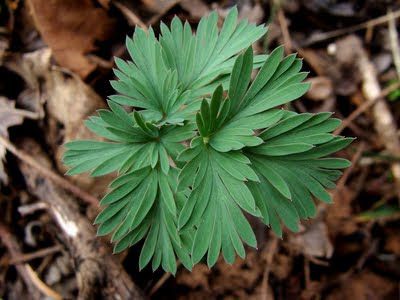 I had big plans to do a series of posts rounding up some nice spring finds, and publish them over several days, but who am I kidding. I've been on several hikes since the last of these images were taken, and each hike generates more images...

So here's a whole bunch of spring woodland posts, published separately but all on the same day, or I'll never get caught up.

Toothwort--Dentaria laciniata. A purple dragon when this young. 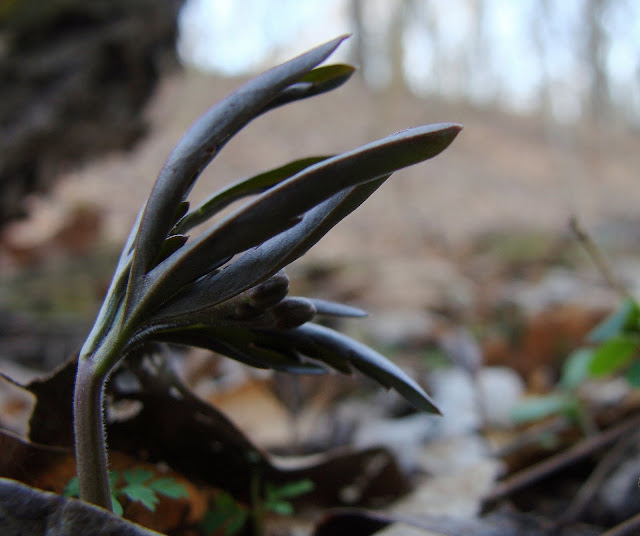 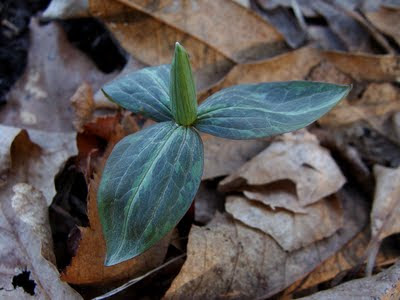 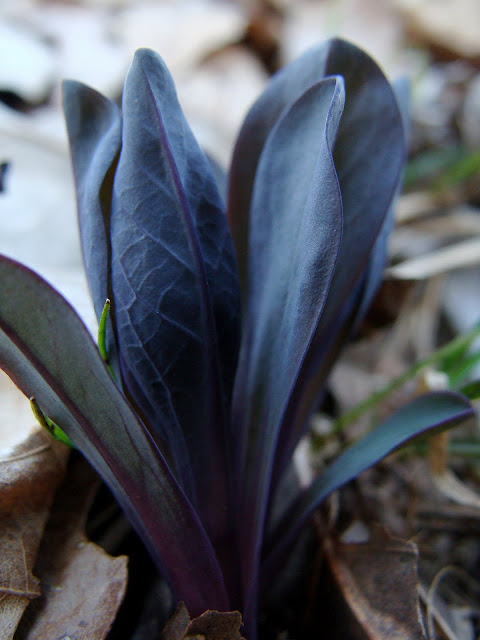 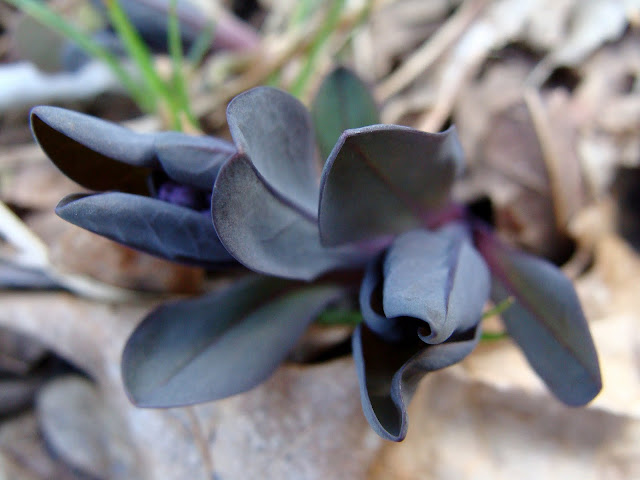 A selection from the forest floor in April.

Here's some things I found.


Spring beauty (that's its common name, not me trying to write cute). Once again, I seem to favor the buds over the flowers.


There were a whole bunch of these right next to the trail in one area. The hole was about the diameter of a pencil. If I had to guess, like, if someone was holding a gun to my head and screaming at me to tell them what I thought made that hole, I'd say, "Worm?" But there's some bees and wasps that do pretty interesting things in the ground. I don't know what made that hole.

Based on those little pellets of soil being there, it's something making a tunnel into the ground, not something emerging from the ground after pupating or whatever.


A nice devil's urn, showing the scaly outer texture and fancy edges they get when they get older. Word on the street says that when these are out, conditions are right for morels, too.

I hope you like them, because I sure do, so you're going to be seeing a lot more of them.


An elegant White Trout Lily bud and its two leaves.

Coming soon: sprouting acorns and a mushroom movie!
Posted by Mycologista at 10:48 PM No comments: